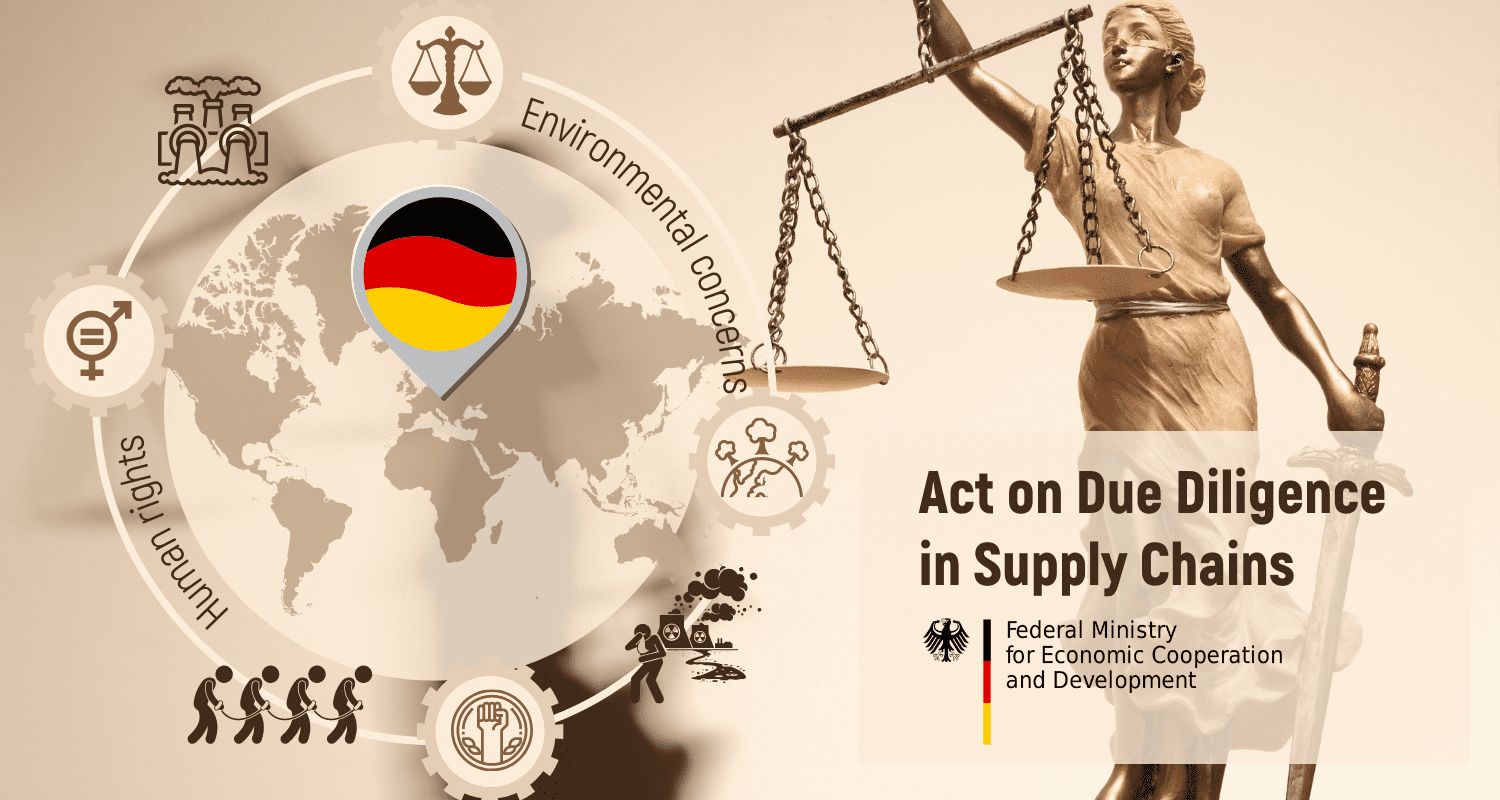 Last month, the German government published a first of a kind Act on Due Diligence in Supply Chains. The law sets clear obligations and liability risks for a great number of multinational companies doing business in Germany. The Act makes the environmental and human rights due diligence process mandatory for companies with more than 3000 employees, taking effect from 2023 onwards. In its explanatory guidance document, the Government states that it hopes the German law serves as a blueprint for European law.

The Act on Due Diligence in Supply Chains is intended to strengthen the protection of basic human rights and enforce the ban on forced labour. Additionally, environmental provisions are also included, as they concern human health and shelter.

The Act will come into force on January 1st, 2023, so companies have enough time to review and accordingly adjust their compliance management systems and processes. Initially, only companies with more than 3000 employees will fall under the scope of the Act. Then a year later the threshold will be reduced to companies with 1000 employees. Overall, that will be more than five thousand companies that will need to comply with the law. Besides German entities, provisions of the law also affect foreign businesses, provided they have a branch in the country.

Aim of the Due Diligence Law

The purpose of the due diligence in supply chains law is to improve compliance with certain human-right prohibitions – child labour, child trafficking and prostitution, forced labour and slavery, debt bondage and the withholding of an appropriate wage, forced eviction and unlawful seizure of land. Furthermore, the law includes provisions regarding inadequate safety standards concerning workplaces and the work equipment. The lack of appropriate protective measures, excessive physical and mental exhaustion, discrimination and payment inequality are also subject to the law.

Additionally, there are provisions pursuing environmental protection. These concern the prohibition of causing a harmful impact on the soil, water, air, and depriving people of safe drinking water, food and shelter. Also the law treats the production of mercury and the treatment of mercury waste (Minamata Convention), including production and use of chemicals in accordance with the Stockholm Convention.

Under the scope of the law fall all steps that were taken by the supply chains in the process of production and delivery of the end product, starting with the extraction of the raw materials up to the delivery to the end consumer. All actions in relation to the product or service taken by the company or its direct, and/or indirect suppliers fall under the scope of law.

Companies have to put the following measures in place both in their own and in their direct suppliers’ business operations:

The due diligence obligations under this law apply only as justified by the circumstances and as soon as the company learns about potential violations. In this case, the company has to act immediately and:

The Federal Office for Economics and Export Control is tasked with overseeing compliance with the law. The authority will perform regular checks on company reports, investigate any grievances that might have been made and also impose sanctions when needed.

People whose human rights have been violated can also report their grievances to the Federal Office for Economics and Export Control and German trade unions and non-governmental organisations may support injured parties from foreign countries by defending their rights before a German court (representative action).

However, the aim of the new law is not to terminate business relationships, rather it has been intended to improve the protection of human rights and mitigate environmental risks in suppliers’ operations. The only time when business relations will be terminated is when an egregious violation of human rights has been found and the measures companies have taken have failed to succeed within a given period of time. If such a case occurs, the government will support the injured business.

This law is not only a major milestone for Germany, as it will affect foreign supply chains, making them compliant with the defined social and environmental sustainability goals. And as earlier this year, the European Parliament approved a proposal for a Directive on Corporate Due Diligence and Corporate Accountability, more adjustments to national laws are coming in the near future.

Source: Act on Due Diligence in Supply Chains

ReCheck is developing a solution that can help you stay compliant with your sustainability data tracking and reporting obligations. So, let’s talk.