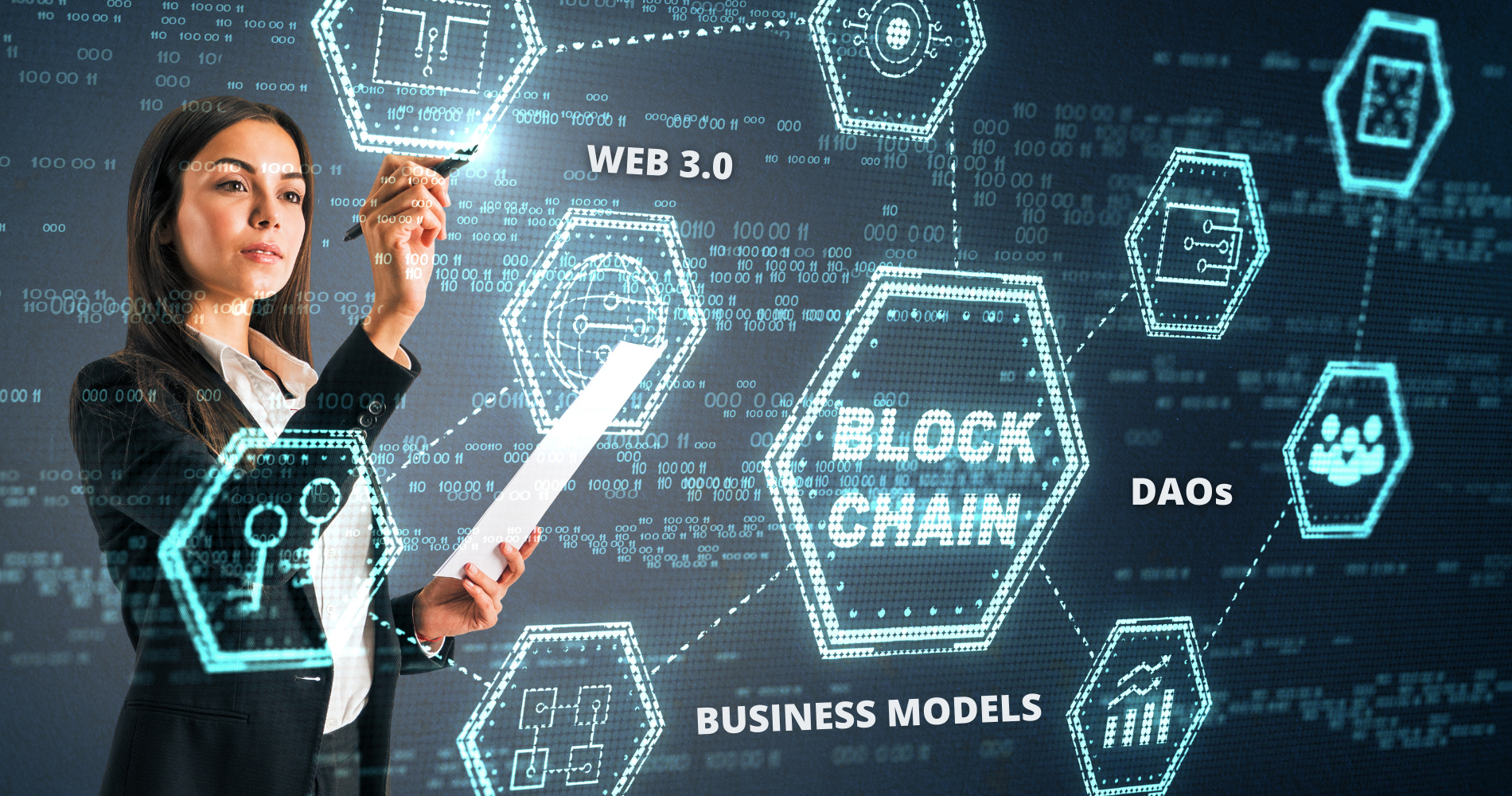 2021 was a pivotal year for Web3. The crypto boom brought the idea of a new Internet into the spotlight, and with the ever-growing list of blockchain-based solutions, communities, and organizations, Web3 more and more seems like an inevitability (in a good way). Web3 will change pretty much everything about how we interact with, use, and see the space and ourselves in it. And another trend is gaining traction – the decentralized autonomous organizations (DAOs) as a new means for pooling resources, self-organizing communities, and co-creating value.

The Internet held a promise – it was supposed to be for everyone, completely free and democratic, but in the past 20 years we’ve seen a handful of big players monopolize mostly everything – the content and how it’s created, the data and how it’s being collected, stored, and used, how networks operate, how businesses work and what limitations they set. Users are at the mercy of corporations that define how data, content, and services reach us – it was all free until it no longer was. Web2 is an Internet owned by organizations, and this is where Web3 comes in – owned and managed by the user, with the keyword being, of course, decentralization.  So, what does this mean for businesses and how will a Web3 business model look? There are more answers than one.

The main difference between centralized and decentralized businesses is the way decision-making processes are organized. With centralized models, a few key people in the organization make all the major decisions, steer the company’s future, the way it generates revenue, how it handles and stores data, and what it decides to do with this data. It’s the executives who make the rules and regulations for everybody – the low-level managers, the employees, and the customers alike, albeit to different ends.

Decentralized business models, on the other hand, do not have one governing body – no board of directors, no C-level managers, no shareholders. Rather, they do, but the line between them is blurred. Instead of concentrating power into the hands of several high-level executives, decentralized businesses include all members of the organization in its management processes. An organization that lives on the blockchain chooses its own governance model and further determines if it is a public or private chain, a permissioned or permissionless one. There are cases where decisions concerning how the chain operates need the unanimous consent of all members of the community, and there are others, where a majority of votes is enough.  This is not a new concept, e.g., a members-only club may give the privilege of voting to all of its members, thus making everyone a vital part of its leadership processes. One could even see the European Union as a decentralized body, where many decisions require the general consent of all member states, and, in many ways, this is a suitable analogy to the way blockchain-based businesses work.

Decision-making is not everything though. With decentralized businesses, data is not stored on one server and isn’t sold to third parties at the behest of a few managers, whose data is of course protected and secured by other means, if at all present. With blockchain-based systems, the data is cryptographically secured by the very participants in those systems – once a record enters the ledger, it never leaves, and cannot be changed. So, having that in mind, what is the actual case for having decentralized businesses?

Are DAOs the business model of the future? It’s early to say.

A DAO (decentralized autonomous organization), sometimes called a DAC (decentralized autonomous corporation), is an organization that is owned and managed by its very members. The decision-making process is handled by proposals and voting, which ensures that everyone in the organization has a say, with no central authority making the calls. The organization’s financial records are stored on the blockchain, while its day-to-day operations are handled by rules (in terms of code) that apply to all members – the smart contract. Therefore, everyone and no one own the DAO at the same time.

Many DAOs do not operate under any legal form and are exclusively digital, i.e. only exist on-chain, with “employees” and “executives” rarely, if ever, meeting in real life. Some DAOs use multi-signature wallets (shared between users) that act in the direction of the DAO. Nonprofit foundations are also often established to oversee the organization and its protocol’s future development.

DAOs, as explained by the Ethereum Foundation, are:

Thanks to its code, which secures the DAO’s treasury and the way it is being accessed (or not), this type of organization offers a new approach, allowing people from around the globe to collaborate and cooperate on projects in a trustless manner. Trust, or lack thereof, is no longer an issue with a DAO because the smart contract foundation ensures every member in the organization is equal and, at the same time, powerless without the consent from the others – a truly flat structure. Once voting is carried out, the outcome of the decision is implemented automatically, the same way as the offering of services. All of this activity is transparent and public.

DAOs also have the potential to eliminate a lot of human input that is very often associated with setbacks and mistakes. A DAO can benefit from complete automation of all processes through smart contracts – every single process associated with a given business: inventory, payments, shipments, and deliveries, for example, can be automated, saving time and labor costs for the merchant. The DAO has no executives or employees – it is a self-sustaining business interested only in keeping itself alive: there are no salaries or intermediaries, and the business can live on very little. A DAO is therefore a business that is self-governed, self-managed, and self-sustaining, requiring a minimum to no human input to achieve its purpose. This is especially true for DAOs that only serve to fulfil a digital purpose, seeing as how if a DAO works with any kind of physical products, it would need to get its hands on IoT beacons that “talk to each other” and track everything in between.

Explore Community-Created and Curated NFTs Inspired by and Bonded with Antiques.

DAO uses cases – virtually limitless, but not yet explored

So far, DAOs have mainly been used in the charity sector, as well as in media, content creation, and fundraising. Executing proposals is one of many uses cases a DAO has, allowing members of the organization to vote on certain decisions through the “shares” (tokens) they hold. One such example is CurveDAO and its Curve Token, which can be locked, providing the member who locked it for longer periods more voting rights in the system.

Funding investments is another use case for decentralized organizations and some DAOs have been created with this specific goal in mind. These communities allow their members to contribute funds and then decide on the best project for their investment, which is an interesting point – it all starts with the funds, and the goal comes afterwards. The members are then given shares that represent their share of the investment and, therefore, a piece of the profits.

DAOs also work well in the media and content creating industry, seeing how a DAO is basically a model for building communities and growing audiences. Engaging the community through a DAO with its own token, governance, and decision-making process allows for the creation of a loyal community of followers or readers. Seeing as they have the same role in the organization makes it that more likely for them to engage actively in the organization’s development and its future.

One of the most famous DAOs in the short history of decentralized organizations is of course ConstitutionDAO – a community that came together with the specific purpose of purchasing a copy of the US Constitution at a Sotheby’s auction by raising $47 million. When the DAO lost the auction to a billionaire, all funds raised by its members were paid back and it ceased operations, but the experiment set a precedent. A precedent that showed how like-minded people could come together in a new way in order to achieve a common goal. It is very likely that we will be seeing more of this in the following years.

These use-cases for decentralized organizations are not extensive, but the technology is still in its infancy and more areas where they can be useful are being explored every day. DAOs are, of course, not without their problems: The DAO – one of the first organizations of this type – was hacked out of $60 million just weeks after it managed to crowdfund them. DAOs have their critics and nonbelievers, but one thing is certain – Web2 has seen its share of centralized entities whose activities remain private and limited to the public. The world has also seen its share of how things might go wrong when things happen behind closed doors. It is then only logical that with a new iteration of the Internet, we will also need a new type of business model.

⟨ Learn What Matters About the Phygital Hype and How NFTs Work  |  How to protect and secure your crypto wallet? ⟩